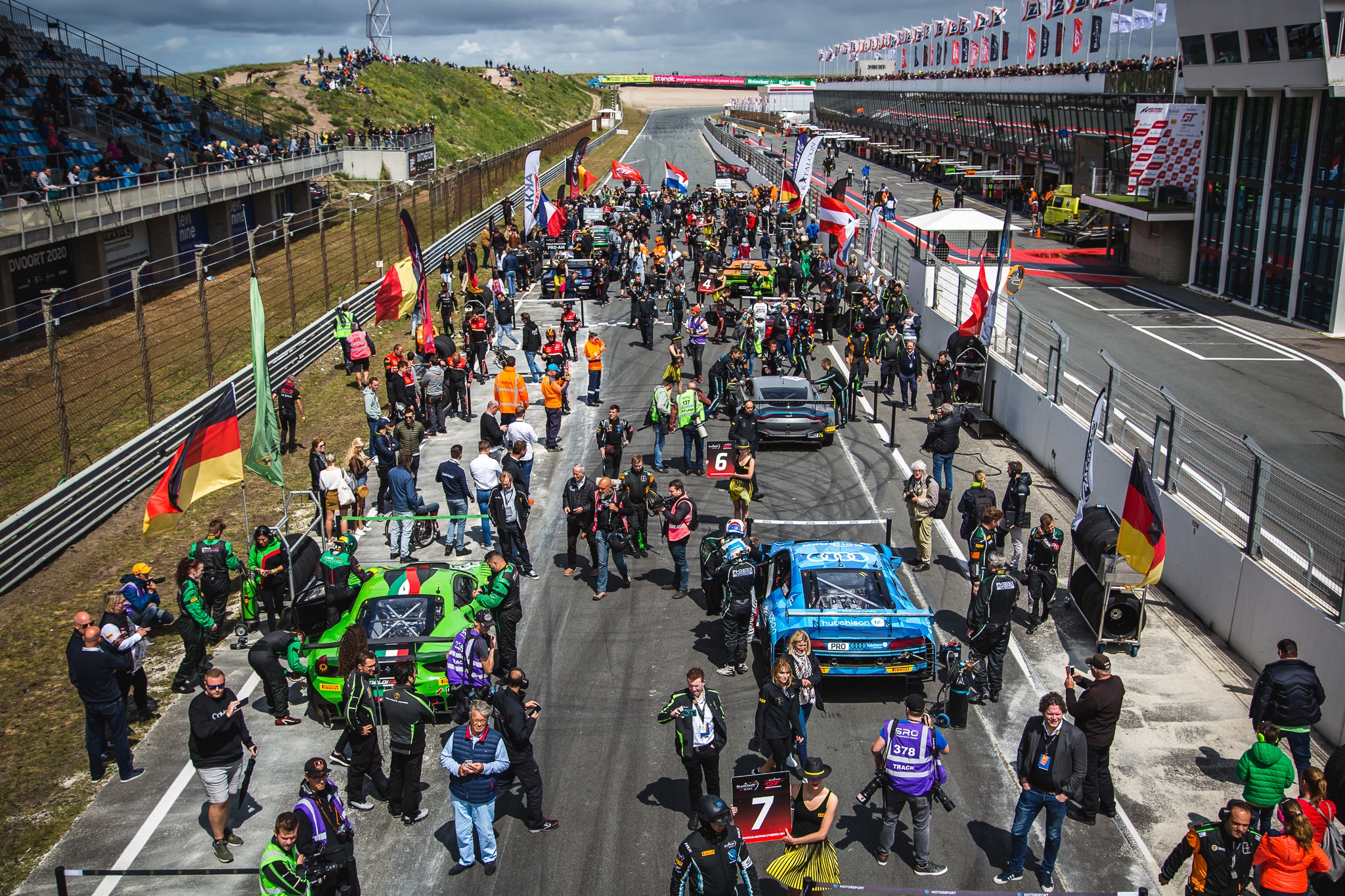 The latest Race of the Blancapin GT World Challenenge was held in the north of the Netherlands in the dunes of Zandvoort. As we are in the mid of the summer you would expect beautiful sunshine and warm temperatures. With the north sea right behind the circuit it was super windy with a sky where you thought of ‘this has to rain sooner or later’ while looking up. But surprisingly it was mostly dry just the qualy session in the morning was on drying tarmac. 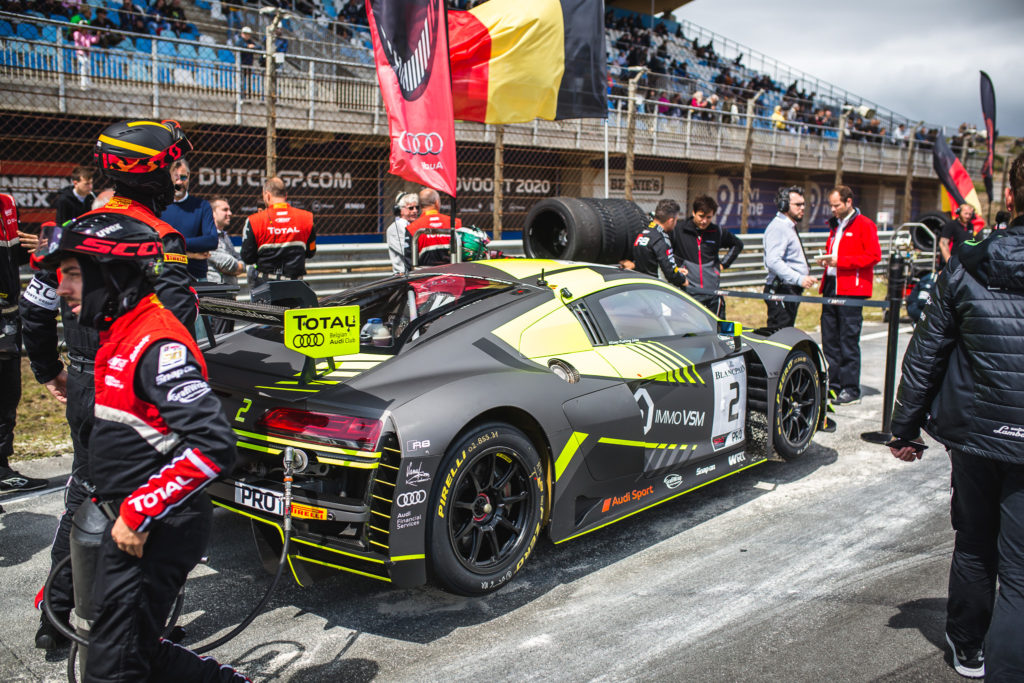 With the Grid set for Race 1 the big crowd expected a hot race in the windy dunes of Zandvoort. On Pole for Race 1 was the #88 AKKA ASP Mercedes AMG GT3 followed by two Lamborghini Huracans GT3 Evo. 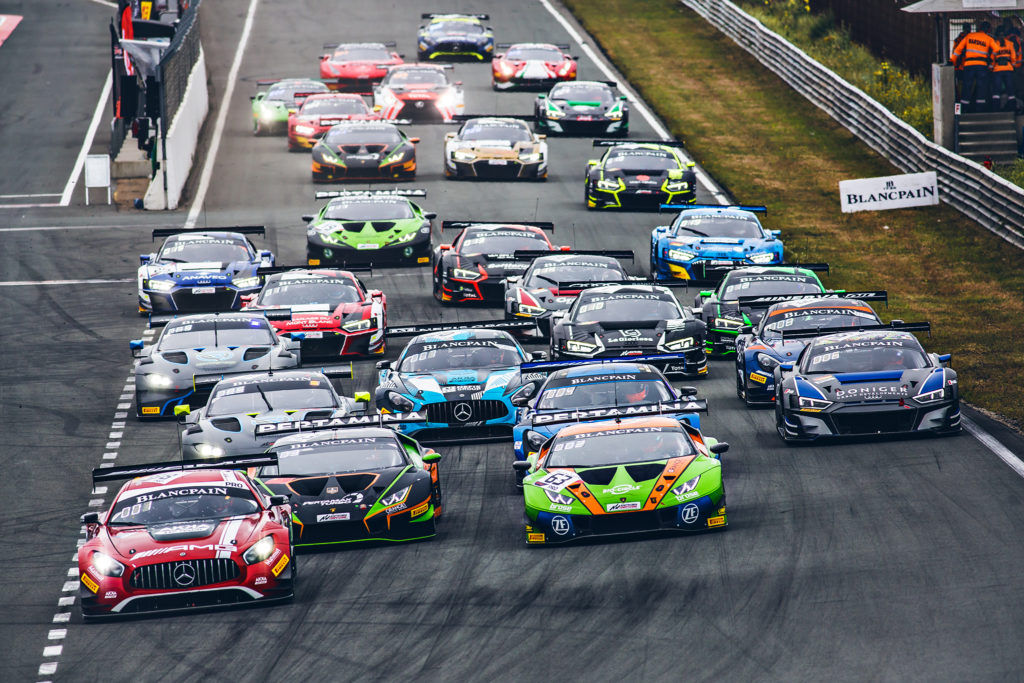 It was a tidy start by every car but trouble hit at the Sainteloc Racing Audi R8 LMS #26 as it rubbed wheels with the #17 WRT Audi. The car spun on the hump at the end of sector one it hitted the barriers rearwards but not very hard . Regardless the car was damaged enough to force a change of the gearbox at the evening. Also #19 Grasser Lamborghini got caught up in this incident but could carry on. 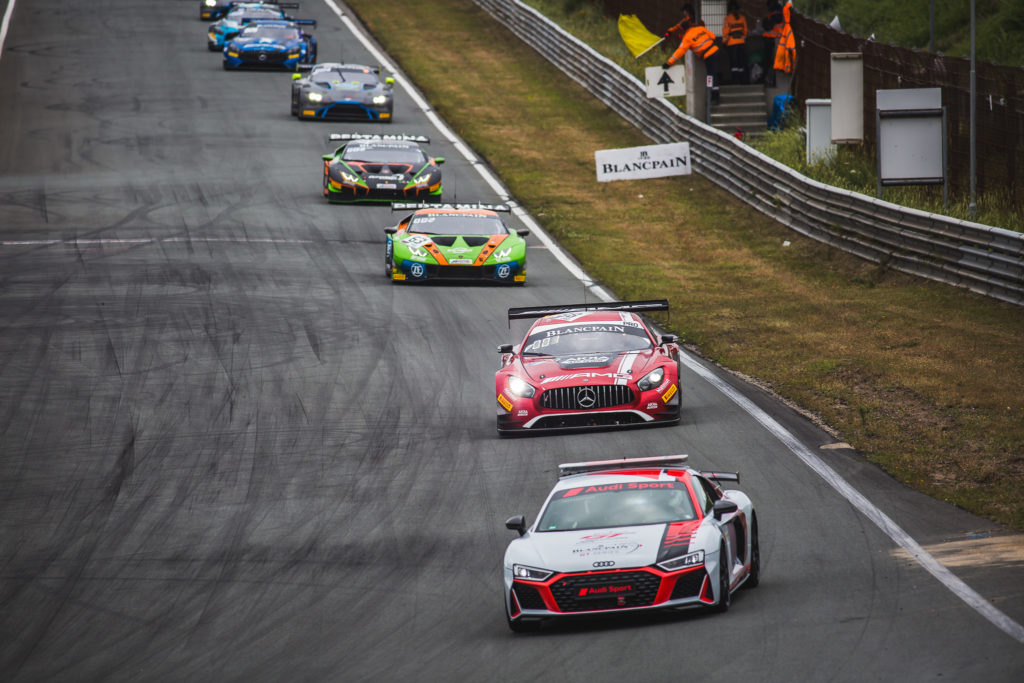 The top three where just fractions of seconds apart as they head to the half way point and the mandatory pit stops. They came out of the pits as they entered and continued to fight. During the pit stops the WRT crew from the #1 car made a fantastic pit stop bringing the car from P11 before the stop up to P5. Suffering from a bad stop was the #76 R-Motorsport Aston Martin dropping out from P4. 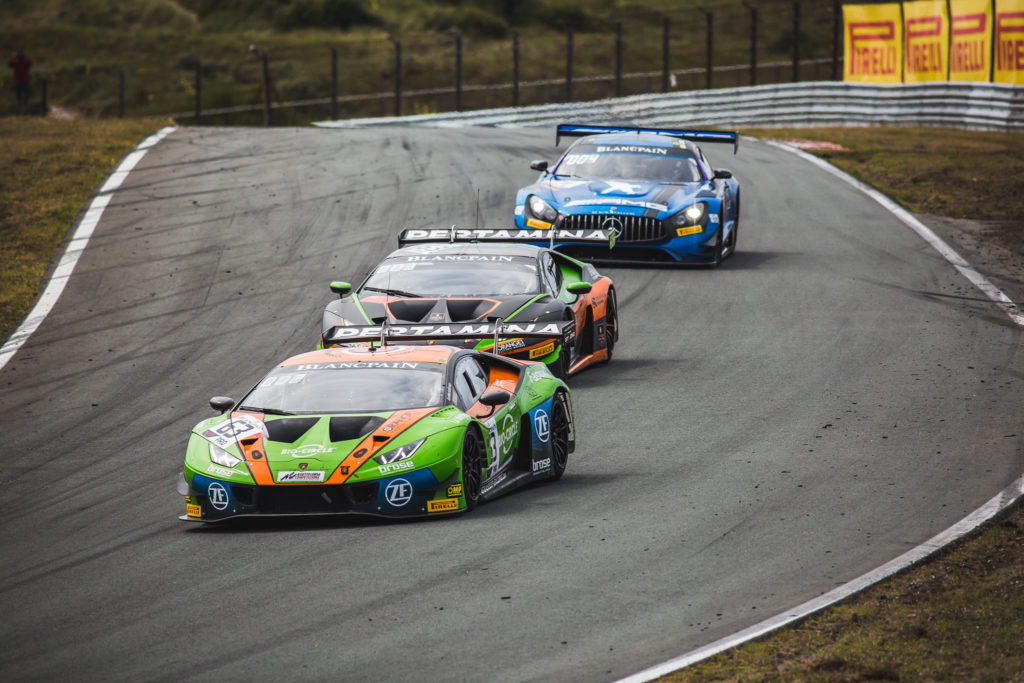 In the second part of the Race the leading Mercedes could extend his lead to an eight second advantage over P2. While the leader was over the dunes the four cars behind the leader could have been seen as one car because they where so close together.

Another cloudy day saw two Audi R8 in the first two Positions and Mercedes in thrid. 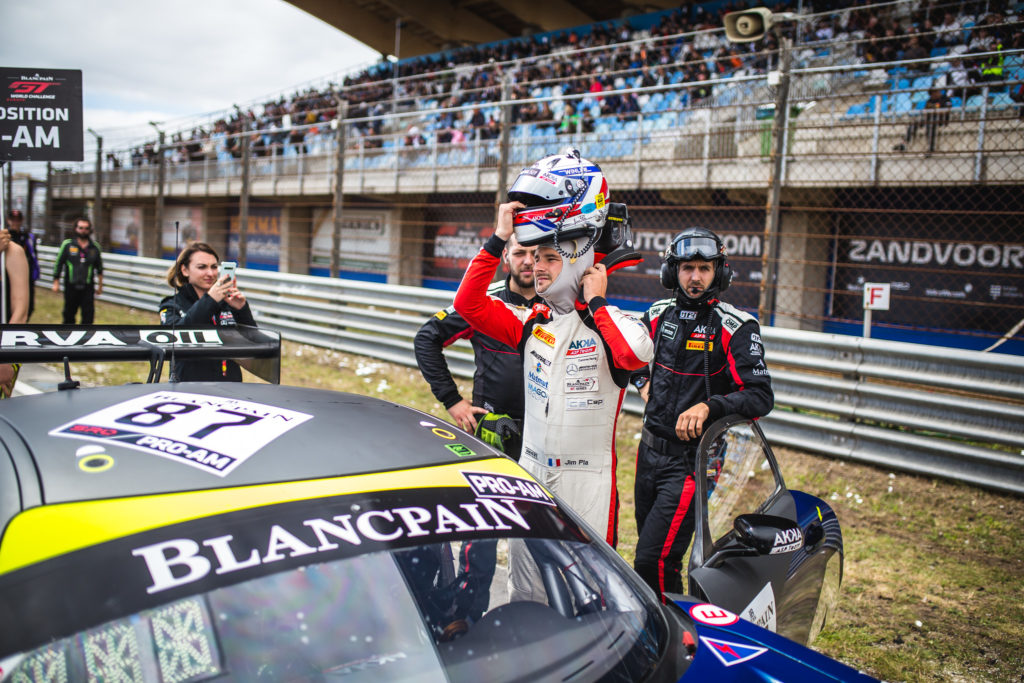 Markus Winkelhock had another bad day after saturdays crash and the replacing of the gearbox at the evening he had a failure of the gearbox even before the race on sunday. This had the consequence of a second formation lap to get the car out of the way. 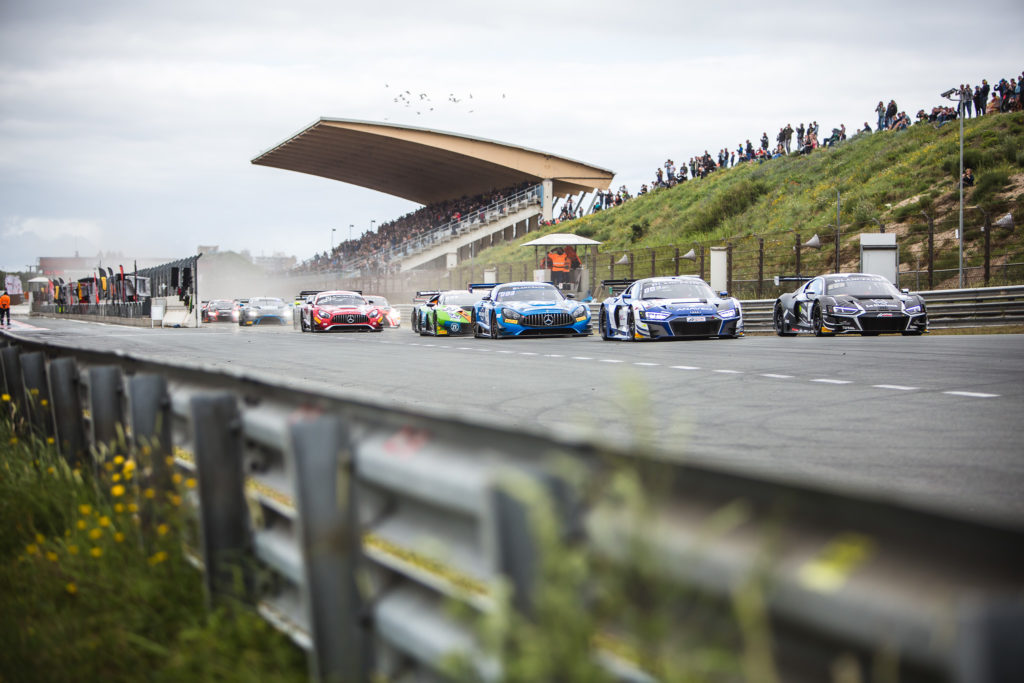 Again it was an even start by the field and the top cars got into turn 1 as they started. Christorpher Haase led the field in the #25 Sainteloc Racing Audi R8 he soon started to pull a margin to the #1 WRT Audi of Dries Vanthoor in P2. Behind Vanthoor almost the whole field bunched up but could not find a way past the Belgian. 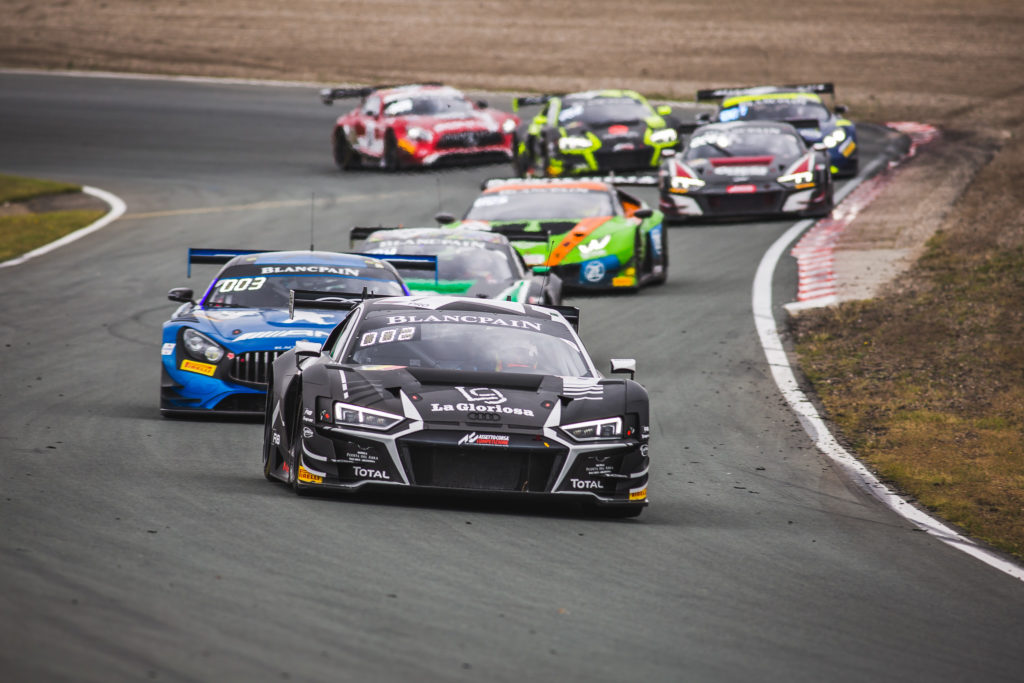 As soon as the pit window was open the GRT Grasser Team made a perfect pit stop and brought their car from P5 up to P2. #1 Audi stalled while driving out of their pit box and allowed the Grasser Lamborghini a ‘free pass’. Again the pit stops saw one car losing it all this time it was the Attempto racing Audi R8 #56 the car went (after a strong qualy with P4) down to P9 due to a slow pit stop. 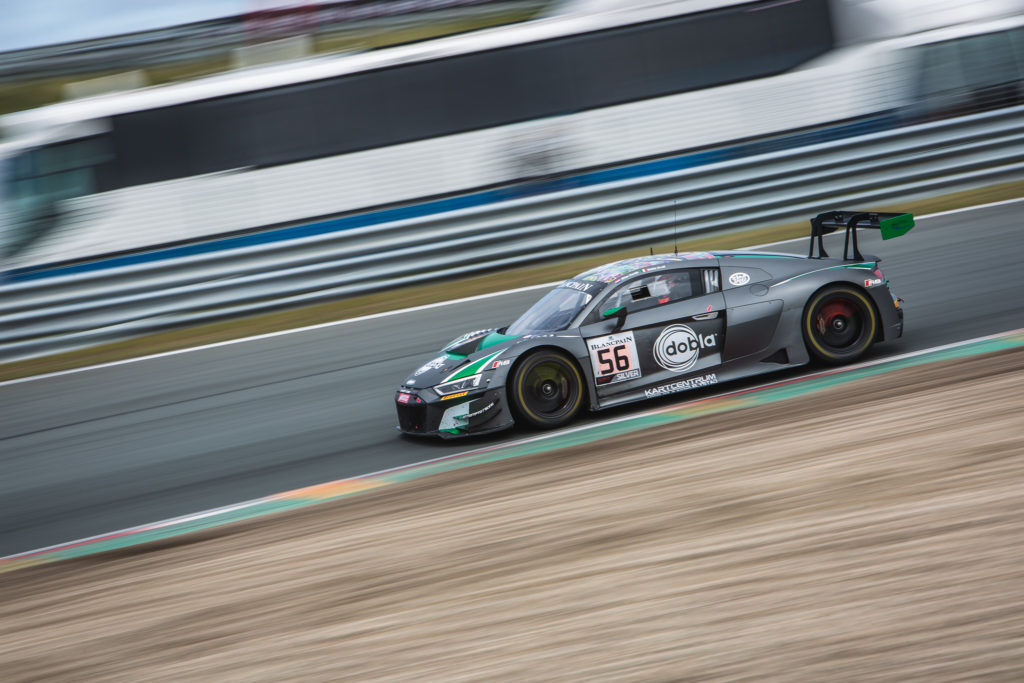 Simon Gachet in the leading Audi had a really comfortable gap to Mirko Bortolotti with almost 10 seconds. 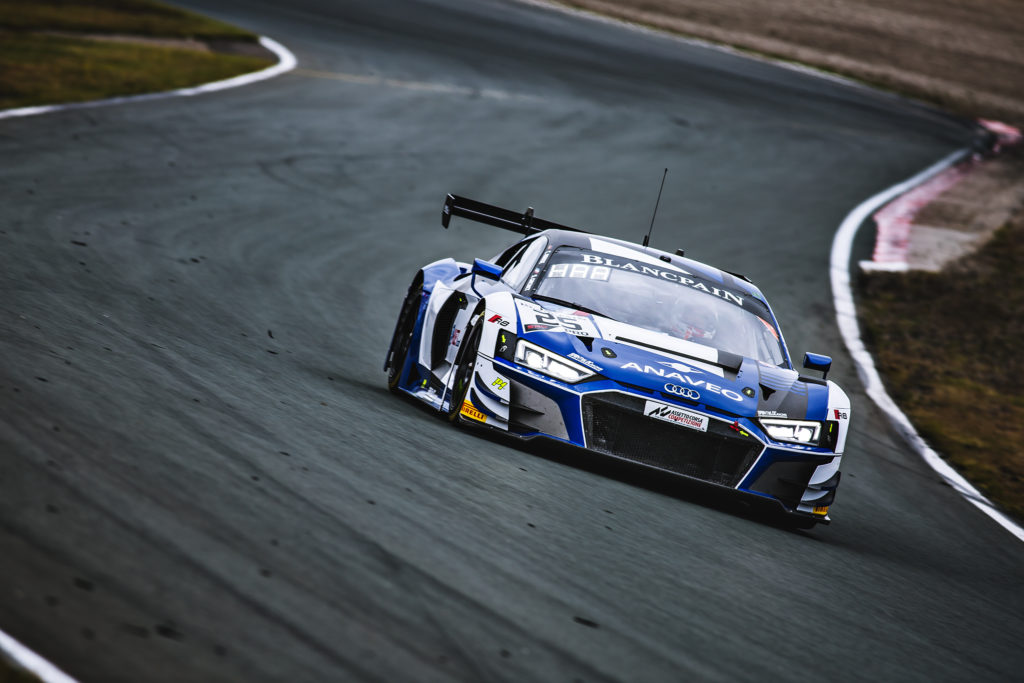 The second part of the race was dominated by the fight for P3 and the four car battle for P10. For P3 the Audi #1 was able to defend from the #4 Mercedes for more than half an hour. In the other fight the end was not so satisfying for the #10 WRT Audi as he was going for an overtake for P10 on the #11 Pheonix Racing Audi the two cars touched in the chicane and #10 had to take a short run onto the dirt and then was spun around by the #17 WRT Audi as he wanted to rejoin the track. 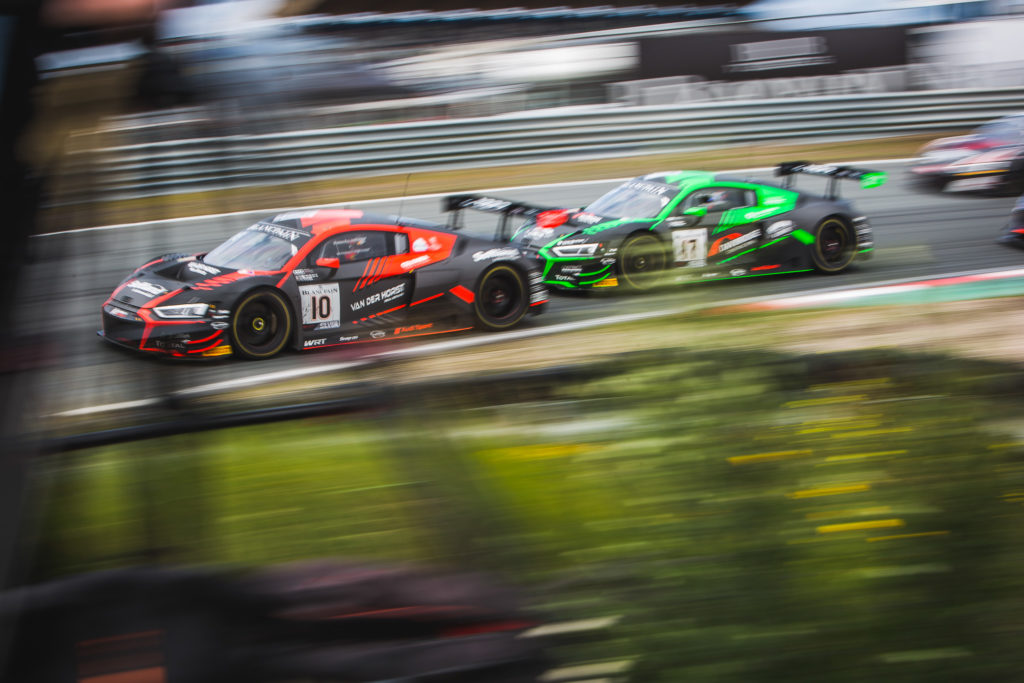 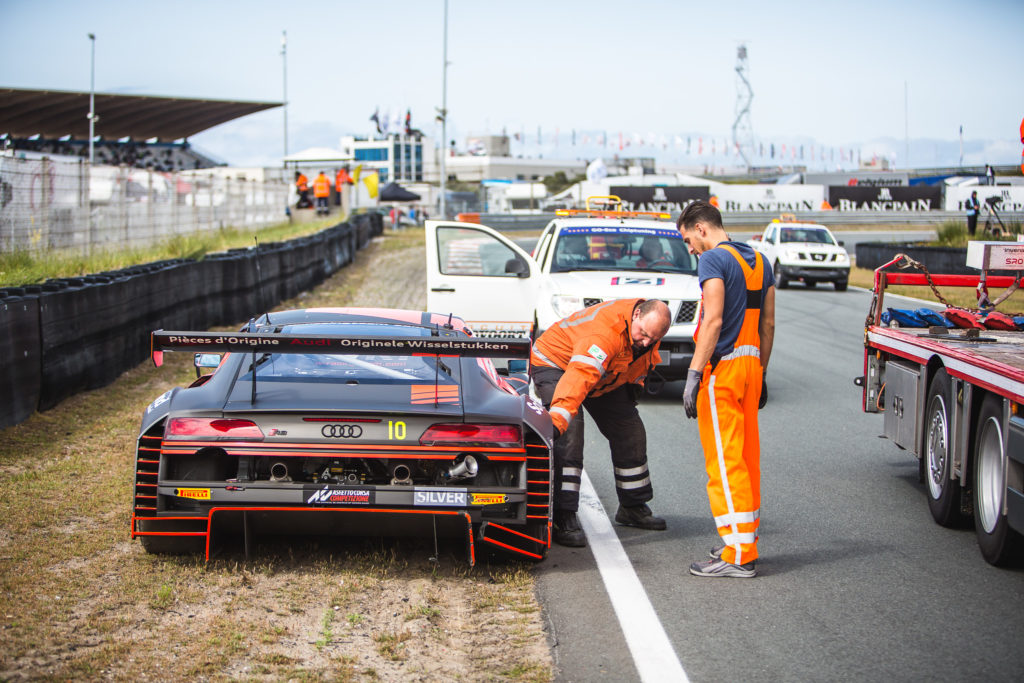 Simon Gachet led his car home and took a dominant win in the last Race before the big Total 24H of Spa at the end of July.

To have a look at the standings