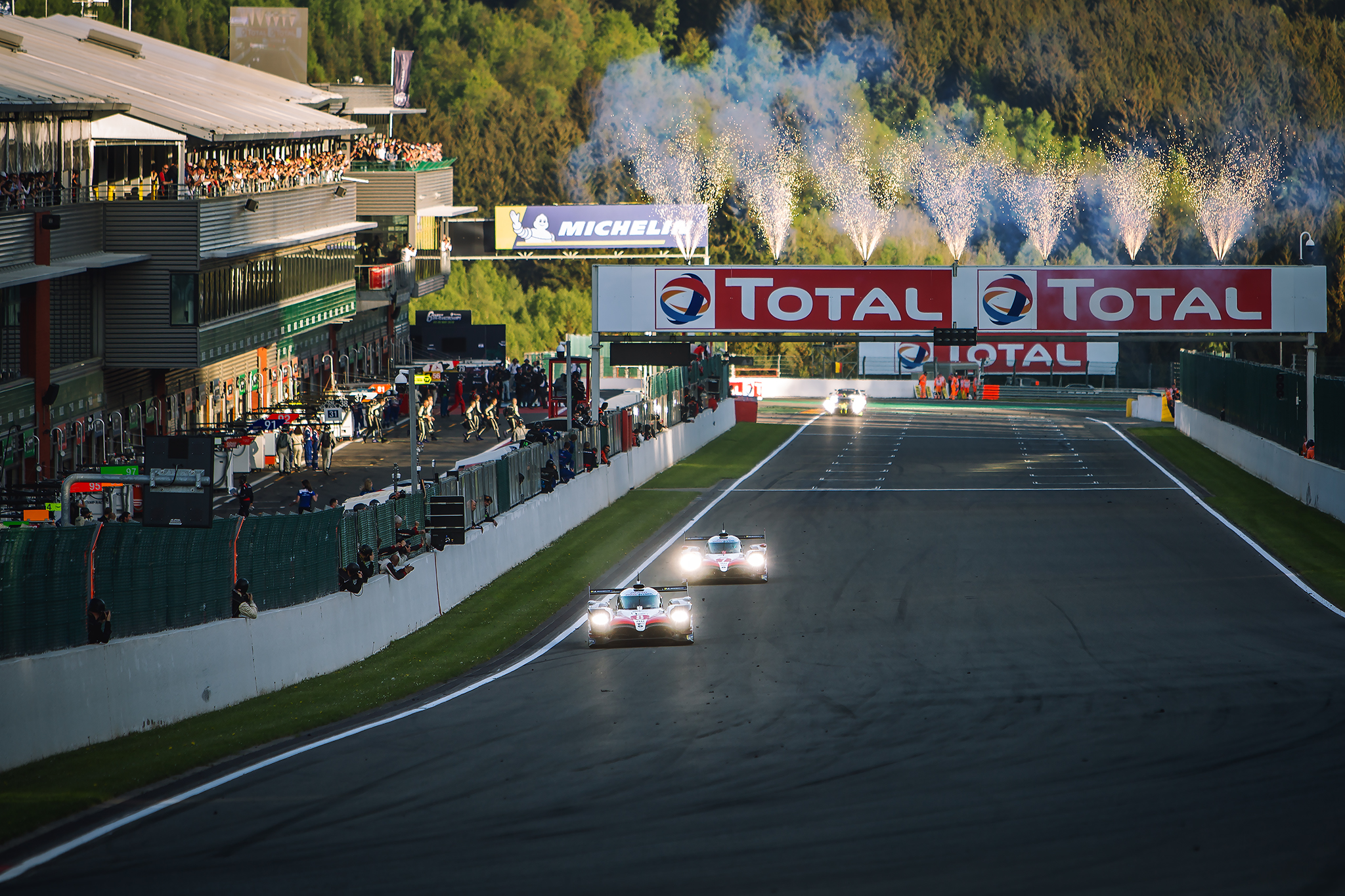 As Fernando Alonso was short before his first race in the WEC, a big crowd attended to watch him and his team starting from Pole in the number 8 Toyota TS050 Hybrid.
After a nasty crash during Qualifying, the number 10 Dragonspeed LMP1 was not able to make it to the Grid. Also we wish Pietro Fittipaldi all the best after his leg injuries. It was a clean start in every class- just the Ford of Harry Tincknell from Pole in GTEPro had to avoid contact with a LMP2car, so he dropped to third. As the number 8 led the way, the two rebellions were right behind the Toyota trying to make a move but with the Hybrid the Toyota had the advantage where he needed it. After a spin from the number 70 MR Racing Ferrari, the Gulf Porsche avoided the standing car but hit the tire wall in Les Combes with minimum speed but slightly enough to force a Pitstop.
The first safety car was deployed on the track and later released the field behind for second time.
The number 7 Toyota joined the race with one lap down after beeing excluded from Qualifying. After the restart, the Racing Team Netherlands Dallara with Giedo van der Garde, took the lead in LMP2. Another lead change in GTE AM: the Aston Martin Vantage passes the Dempsey Proton Racing Porsche 911 RSR.

Right as the second hour of Racing began, the number 67 Ford GT of Harry Tinknell had a major crash at Eau Rouge and hit the tire wall straight with around 200-220 kph. As he had more luck than Fittipaldi he walked away with no further injuries. The leader in LMP2 had to give up the lead as they had to take a longer pitstop. A Full Course Yellow freezed the race for a third time because the 88 Proton Racing Porsche spun at Piff Paff. Ferrari started to pick up their pace and so they gained positions. As the podium spots in LMP2 shuffled nearly every two laps, the racing in the GTE Pro was phenomenal, the LMP1 win was already in the hands of number 8, so that the only two questions left were: Does Alonso really win in a Japanese Car?
Is number 7 able to chase down the two rebellions?
We will find out! Meanwhile Ferrari picked up more momentum as they were like a double trouble for their opponents. While passing by both of the BMWs, they chased down the 92 Porsche as well. As Ferrari then was able to make a move, the third round of pitstops came and ruined
their work. The number 51 Ferarri was first to let go after the stop but suddenly the number 56 Project One Racing Porsche came to his stop and hit the Ferrari as he wanted to drive out of his box. This meant that the 51 had to make another stop to repair the car and the 71 also lost time because the crash happened in front of the 71. Drama in LMP1 for Rebellion number 1 (meanwhile third place because Toyota number 7 chased both down and passed them) and then further more drama, because the third place Rebellion had to take a pitstop for technical issues with the radio. As number 1 Rebellion suffered and number 3 lost time as well, the number 17 SMP Racing LMP1 was third by Pitstop cycle and then in a real third position after very fast laps. As Rebellion number 3 was on a mission to take back P3 from the SMP Racing car the battle in GTE Pro raged on. Ferrari again was very quick after losing time in the pits. In GTE Am it was still the 98 Aston Martin that was in the lead, but now getting more pressure from the 90 Aston Martin from TF Sport. In LMP2 G-Drive was out in front but behind them the positions were changing constantly. Close to the last hour the 3 passed the 17 as the 17 was held up at the top of Radillion by a Porsche. Just a hand full of laps later the 17 had a big hit at Eau Rouge/Radillion as the Russian car hit the outside tirewall at the old Pitexit. The last hour began with the move of the race as the remaining Ford passed the leading Porsche while going together through Eau Rouge. That was the pass for the lead, too. As the 91 was not able to keep the pace of the Ford, the two Porsche swapped positions. Now the faster 92 had the task to catch the Ford and take the lead.

Davide Rigon also went past the 91 due to the tires on the car that could not keep the pace up. So Ferrari up into third after not the best weekend they had after the overtake in the last lap and in the last corner on the slowing 91. The checked flag fell and after a commanding race the Toyota number 8 with Fernando Alonso, Kazuki Nakajima and Sebastien Buemi took the win with the 7 in second position and the number 3 Rebellion in third. LMP2 was won by G-Drive with a big margin in a normally tight class with Jackie Chan DC Racing number 38 in second and the Signatech Alpin number 36 in third.

The remaining Ford took the win in GTE Pro followed by the 92 Porsche and the 71 Ferrari. Aston Martin Racing won GTE Am with the TF Sport Aston Martin in second and the Clearwater Racing Ferrai in third.

So Alonso really did win in a Japanese car without having any problems and Toyota is so fast that they are able to take two laps on the other LMP1 Cars. These are the answers to the questions above.