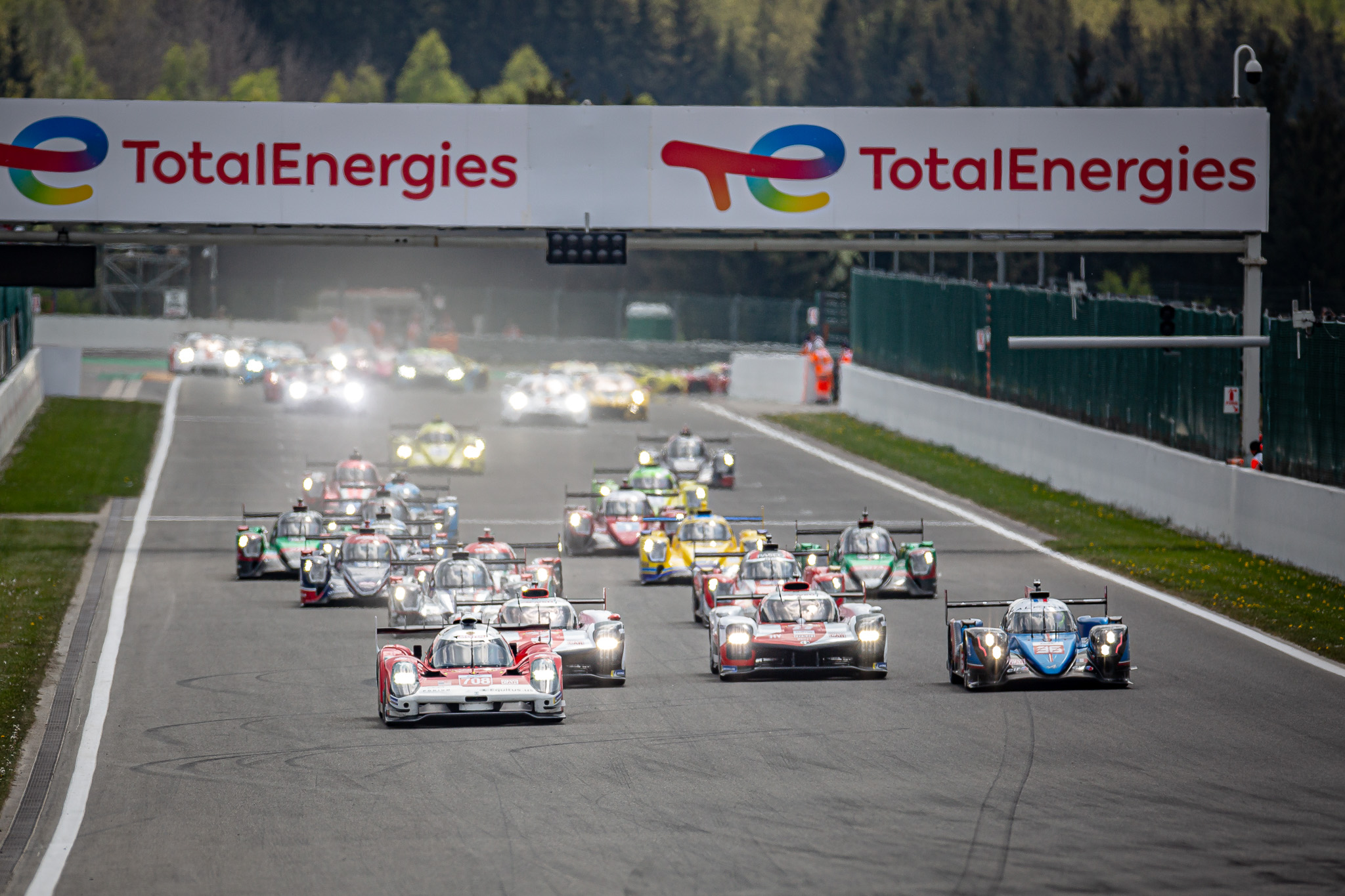 Here is Fuelieheads’s recap of the 2022 edition of the annual 6H of Spa Francorchamps.

WEC welcomes back the fans!

For the first time since the Race back in 2019 the WEC welcomes back its fans, and it was a huge crowd witnessing whats was going to be a race filled by Ardennes weather and crashes.

Glickenhaus on Pole and in the Lead

The Glickenhaus 007 LMH operated by the German Joest Team clinched Pole Position on Friday evening and led the early parts of the Race. The Alpine lost out from second to the 2 Toyotas. In LMP2 AF Corse lost their lead to the #38 Jota Sport car with the #31 WRT car in second. The two Porsches collided at the first turn ripping the left rear tire of the#91 polesitting Porsche.

The #92 sister car continued in the lead with the Corvette in second place followed by the 2 Ferraris. GTE Am was lead by two Aston Martin followed by a pack of Porsches. The Iron Dames Ferrari spun into the gravel in La Source bringing out the first safety car of the day.

The gap at the front stayed relatively close with the Toyotas chasing the Glickenhaus. Alpine could not go the pace of the other cars in front. On Lap 16 both Toyotas then found a way by the Glickenhaus. First on the end of the Kemmel straight and then round the outside of the Bus Stop chicane. And both Toyotas could build a gap to the Glickenhaus. With about 40 Minutes done the first LMP2 cars came into the Pitlane to get new fuel and head back out. A little over 50 Minutes into the Race the HyperCars came in for refilling their fuel tanks. The Toyotas where able to stay out the longest.

As always the LMP2 class produced close racing. With the Pro/Am entered AF Corse LMP2 giving their Amateur driver his first stint the car lost more places against the not Pro/Am cars but still in the lead of their subcategory. For LMP2’s second place Sean Geleal for WRT and Lorenzo Colombo battled for lap after lap. Another 3 cars close together including the #41 WRT entry where battling for 11th Position in class.

The start of a lot of chaos

Right after the first hour passed Miro Konopka in the ARC Bratislava LMP2 spun out of Fanges into the tire wall on the left side. Driver was ok but the car was heavily damaged and the second safety car was called out. Just before the safety car as called Rui Andrade in the #41 managed to pass the Intereuropol car into Les Combes to improve his position.

After some laps behind the safety car the race had to be red flagged for the first time as the track workes had to remove the stranded car from the middle of the road and do a bit of barrier repair.

As the cars waited for the race to resume it started to rain on track and the teams had to grab their rain tires as the rain came fast. The #8 Toyota had troubles restarting the car as the cars left to continue behind the safety car again resulting in the car stopping on track not able to continue. Also the #71 AF Corse Ferrari in the GTE Am class hit the barrier out of Les Combes while warming up his tires behind the safety car. The rear bodywork and wing had to be replaced in order to continue. As ever in Spa certain parts where very wet and other parts where completely dry so the strategy would be very key in this moment. Some of the cars still on slicks opted to go for wets while the safety car was still outside other stayed on slicks. Resulting onto the Richard Mille LMP2 leading the race. The rain got even more torrential as time went on under safety car conditions. The valley part at Stavelot already was soaking wet while the upper parts still had just light drizzle. WRT made the right strategy call and changed onto rain tires during the red flag period that meant after all cars coming to the pits the where the overall leader. And so the race had to be red flagged for a second time as the second hour passed away and the rain became so intense that it was not safe to let the cars race as standing water got even more present.

WRT’s LMP2 cars on a Mission

It was still raining when the cars got back to safety car procedure but the race director decided it was safe to race shortly after some laps behind the safety car. So the #31 WRT led the way into some very wet racing action.

The Alpine HyperCar could not keep up with the LMP2 car in wet conditions and had to let go the remaining Toyota. But also the Toyota had no real answere for the pace that Robin Frijns was able to go in an incredible stint from the Dutch man. Norman Nato in the other WRT car was also moving up the rankings overtaking one car after another. Seb Ogier also had his rally moment going into the gravel at Campus corner but he was able to keep the wheels spinning and get the car back on track. Both United Autosport cars made their way by the Robert Kubica driven Prema LMP2 so they now where running 2nd and 3rd . Robin Frijns meanwhile extended his overall lead to over 15 seconds over the Toyota. A lot of cars where finding the limits of what is possible on a very wet Spa track as a lot of the mistakes happened at the exit of the remodelled speakers corner. The Ultimate LMP2 entry spun out of Fanges and ended up in the gravel trap and had to be removed and therefore bringing out a Full Course Yellow right at the half way point. A lot of the cars used this neutralisation to do a pit stop. After all who wanted made their stop and the race got back to green the #31 WRT was still in the lead of the race with Toyota in second leading the HyperCars. GTE Pro was lead by the Ferrari #52 getting the strategy very right followed by the #92 Porsche. GTE Am was lead by the #46 Project 1 Porsche.

The next safety car had to be called after Alex Brundle put the Intereuropol LMP2 in the wall at speakers corner on his outlap unable to continue with big damage. While that happened the rain picked up intensity again and a lot of drivers complained about a lot of aquaplaning all around the track. During the safety car period to remove the car and check the barriers the rain still held a high level and rivers where building up around certain parts of the track. These rivers got so deep that a Ferrari of the GTE Am class spun on the way down to Pouhon almost collecting the Truck of the barrier repair team. For the race director there was no other option as to red flag the race for a third time.

With about 2 hours and 20 minutes to go the race resumed under safety car conditions once again. Still in the lead, the #31 WRT LMP2 car. 13 more minutes behind the safety car till the race was green flagged again. The track now was drying out relatively quick as the rain became less and less. After the restart both Ferraris now where in the lead of GTE Pro but the Porsche was on their tails.

No more red flags but still a lot of mistakes

Within the last two hours of the race the GTE Pro battle became more intense as the Porsche had the pace but the Ferraris had the track position. Meanwhile the remaining Toyota finally overtook the WRT car to reclaim the lead and the Glickenhaus followed one lap later. As the track got almost so dry to change to slicks the HyperCars all overtook the WRT LMP2 car and chased after another. In LMP2 however fighting was still on. Both Jota cars fought with the Penske entry going 3 wide at some point during their battle. A bit less than 90 minutes to go the next full course yellow came out. This time it was Sebastien Bourdais missing his braking point for Brussels corner and ending up in the gravel trap. This full course yellow was used by some teams like the AF Corse Ferraris to change to slicks tires. The next cars to make a mistake where the Prema LMP2 car hitting the wet lines out of speakers corner with slicks and damaging the front of the car and the #21 AF Corse GTE Am Ferrari trapping himself in the gravel at Les Combes. The stationary Ferrari brought out the next full course yellow. Sadly the Glickehaus lost time to a miscommunication where the driver wanted cut slick tires but the team put on full slick tires so the car had to come in again. With 58 minutes to go the race went back to green flag running but this should not be for long as in the same lap the #28 Jota car carried to much speed into the campus corner and hit the tire barrier.

The top 3 in GTE came closer and closer together and as the racing resumed there where about a 3 second gap between the both Ferraris and directly behind the Porsche was waiting for a chance to attack.

Without the tv cameras noticing the #41 WRT made its way up the ladder with clever strategy and a bit of luck till second of the LMP2 class behind the still leading #31 sister car. As well as in the Pro category the GTE Am class top 3 got closer and closer. In the lead was the Dempsey Proton Porsche followed by the two Aston Martins of TF Sport and Northwest AMR.

The Porsche #92 got a great run out of La Source after following the Ferrari for many laps but it was not meant to be just now. But when the Ferrari got hold up by a backmarker in La Source the Porsche used it to perfection and went up to second now chasing the lead Ferrari. That being said the Porsche already was on the back of the Ferrari a lap later. The challenge had to stop there because the #56 Project 1 Porsche went off track at speakers corner and hit the barrier brining out another full course yellow.

With 10 minutes to go racing resumed and so did the battles. The #92 Porsche gave everything it possibly could without binning it but came up short to the Ferrari #51.

Toyta won this action packed and crazy race in front of the Alpine and the winner in LMP2 the #31 WRT car completes the overall Podium. Second in LMP2 went the way of the sister #41 WRT car with the #38 Jota car in third.

GTE Pro as already mentioned was won by the Ferrari #51 even if both Ferraris did not had the speed they stayed clear of any incidents. The #92 Porsche claimed second and the sister Ferrari #52 rounds out the top 3. In GTE Am the order stayed the same with the Dempsey Proton car on top followed by the pole sitting TF Sport Aston Martin and the Northwest AMR car.

All set for the big one

The highlight of the Season will mark Round 3 of the FIA WEC. From the 11th of June the field of 62 cars will go for glory twice around the clock.