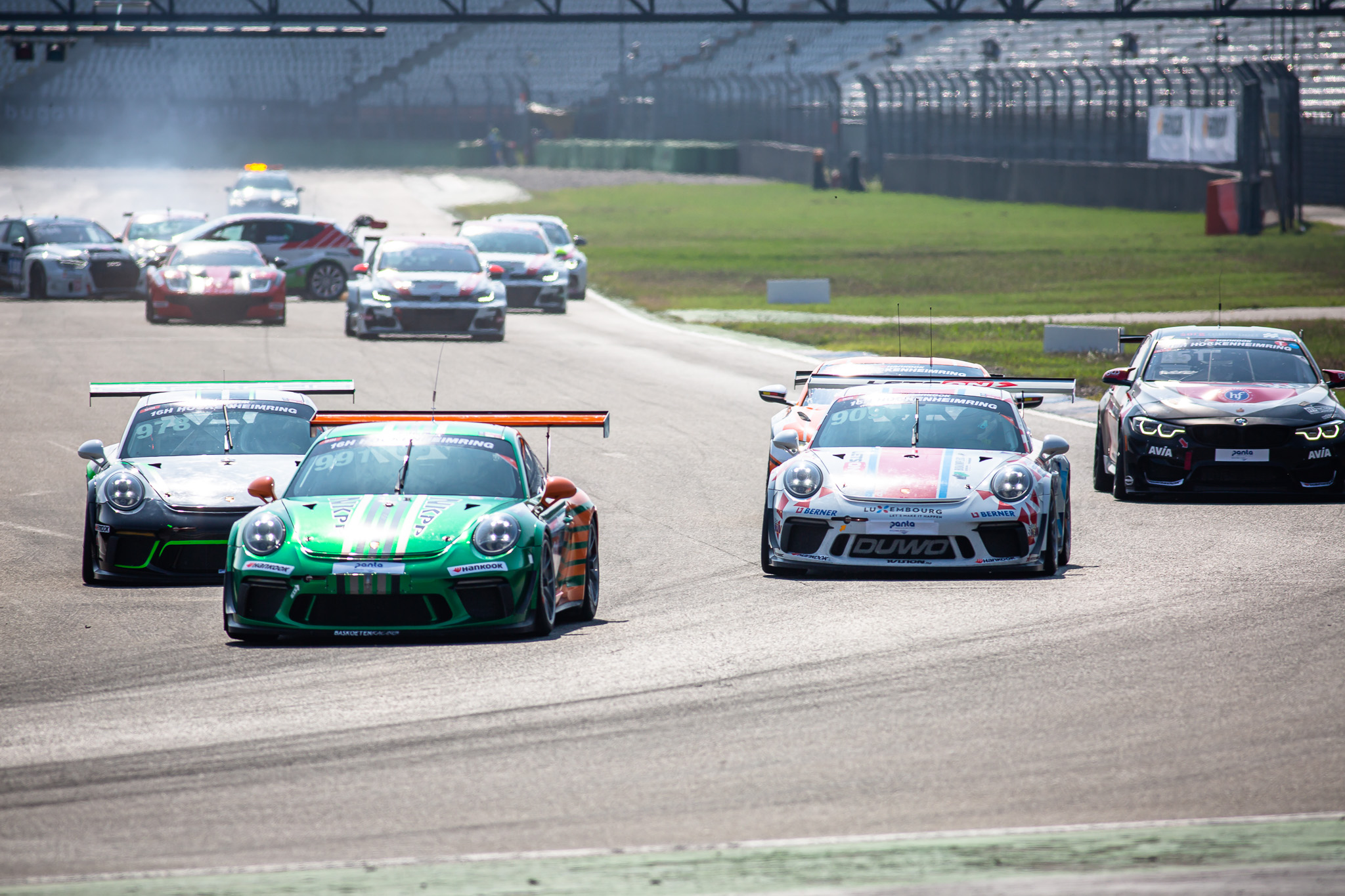 But why was this event unexpected? Well, the original plan was to run the 24H of Barcelona but increasing Covid-19 cases in this area had the organizers quickly provide a ‘Plan B’. The Hockenheimring and the Creventic group quickly made a plan to compensate the loss of the Barcelona event to bring the fans the first ever visit of the 24H Series to Germany.

The race itself is divided into two 8H Parts and the teams are not allowed to change anything on the cars overnight.

At the start of the race the Renault RS.01 GT3 of Equipe Vershuur took an early lead over the CP Racing Mercedes AMG GT3. Behind the two GT3’s in the GT Division the NKPP Team 911 Cup Porsche took the lead from DUWO Racing in the 911 Class. In GT4 the Aston Martin from ProSport converted its Class pole into a race lead.

In the TC Division Autorama could not converted pole into an early lead while their second car had to settle for fourth with the Red Camel Jordans car in third. TCX Class leader Nordschleife Racing was also the leader of the TC Division with their Ligier JS2 R. Early drama hit the Topcar Sport Cupra TCR and the AC Motorsport Audi RS3 LMS tangling even before Turn 1.

While the Cupra could rejoin being 1 lap down the Audi had to repair in the pits for some laps. As the leads grew the race settled into a rhythm after the DUWO Porsche retook the lead in 911 Class. The closet racing was between places 3-5 in the TC Division. Rain was expected to come around late afternoon to spice up the race.

After 1 hour of racing the Ligier was hit by problems surrounding the front floor of the car and it had to be pushed back into the pits for some repairs. With that the #112 Autorama entry took the lead back with the #1 sister car in second and #101 Cupra in third. The GT-Division maintained their positions at the hour mark.

As the drivers changed and the strategies started to play out the #131 Topcar Sport car was able to recover the lap lost at the start of the race while #9 Equipe Vershuur was still in the lead over the #85 AMG. Before halftime of part 1 the ProSport Aston Martin GT4 had a long repair stop dropping them to last and handing the GT4 lead to the Sorg Rennsport BMW M4 GT4. Overall lead was still held by the Renault chased by the Mercedes and Autoroama also held on to their TC lead with #131 and #1 close behind.

Three and a half hours from the end of part one the leading car did a brake change but they had problems getting the old brakes off the car and dropped 3 laps to the now leading Mercedes.

2H and 40 Minutes left the expected rain began to fall and saw the #240 Day V Tec BMW 240i spin into the wall but with no major damage so they were able to continue. The rain was not very heavy but after some minutes the question of whether to put on wets or leave the car out on slicks was in the head of the engineers. Most of the rear wheel driven cars came in for a full set of wets while the #112 Autorama VW Golf TCR car listened to their driver Benjamin Leuchter who has driven lots of races in the car. He told his Team to put wets on the back wheels and put slicks to the front wheels because the TCR Class cars have front wheel drive. At first the strategy went against them bay being 4 seconds slower as the sitser #1 car. But as Leuchter predicted while talking to us the rain did not last for much longer and the track dried out very quick.

Short before the 2H mark the Speed Lover Porsche spun at the entrance to the Motodrom hitting the wall on drivers right. As the driver came back from routine checks in the Medical Center he told his Team in very furious style that there was a cone on the exit and he could not avoid it and spun by running over it. The car had no severe damage but had to be repaired. With the following Code 60 most cars came in to change tires or fuel up.

90 Minutes from the end of Part 1 the Equipe Vershuur Renault broke the left rear suspension bringing out another Code 60 and the car into its Pitbox for a long repair job. Weather continued to change from dry to rainy conditions throughout the last 2 hours making it difficult to get the strategy on point. Also the Red Camel Jordans Cupra TCR had to be repaired after damage to the front.

The last minutes of Part 1 the rain held the track wet and we could see how everything has played out. In the GT Division it was the remaining GT3 car #85 CP Racing Mercedes-AMG GT3 that led the field home from #909 DUWO Racing Porsche 911 Cup which also led its Class. Overall P3 went the way of NKPP Bas Koeten Racings 911 Cup. TCE Division P1 went to TopCar Sport and their Cupra TCR with the two Autorama #1 and #112 close behind but with a brake change more in their bag the strategies look to be on their side.

Part 2 began at midday just as Part 1 did the day before. The cars where parked on the Grid and no one was allowed to change anything on the cars. That however meant that most cars started with rain tires on a sunny day. Primarily the GT Division cars with their rear wheel drive had to come in right after the start. Some of the TCR cars stayed out with slicks on the front end and wets on the back of the car.

The #9 Equipe Veshuur Renault was back in the race and all cars were running. #85 held a healthy lead by several laps over second place #991 NKPP Porsche while the remaining GT3 car #9 tried to make up lost ground. Half an hour and one Code 60 into the race #909 DUWO Racing Porsche took Class P1 from NKPP and Overall P2.

Different pit stop cycles meant that the first three positions in TCR changed every pit stop. With every car #1/#112 and #131 all grabbing the lead at some point through the stint.

6 and a half hours left the leading Cup Class #909 DUWO Racing Porsche had to repair something at the rear of the car, probably exhaust because since the last hour of Part 1 the car sounded strange. They lost the class lead to #991 NKPP Porsche.

About 5 hours from the end another Code 60 interrupted the race bringing in almost every car for refueling and tires. Reason for the Code 60 was the leading #85 CP Mercedes AMG GT3. The car crashed in the famous Sachs-Curve and had to be toed out of the gravel. Also the Renault which again had a technical problem and had to stop on track. With exactly 5 hours to go the AMG reached its pit garage and the damage seemed not too severely. The team still had a six lap gap to their nearest rival which was the NKPP Porsche Cup car.

Under the bonnet the damage was somewhere around the right front suspension leaving lots of work for the mechanics. So the 991-Class leading NKPP Porsche took the lead from the CP Racing Mercedes with 4 hours and 42 minutes to go. Also the AC Motorsport Audi RS3 LMS stopped on the Parabolica and had to be toed back to the pits.

4 hours 15 minutes from the end the Mercedes returned to the track in overall P4 and 12 Laps down. Still leading was the NKPP Porsche in front of the DUWO Racing Porsche.

In the following hour we had a long green flag period until the #401 PRO-Sport Aston Martin Vantage GT4 had a rear right suspension failure at the exit of the Sachs-Curve. This meant another Code 60 with about 2 hours and 30 minutes on the clock.

2 hours from the flag the leading Porsche was caught by the DUWO Porsche as the CP Mercedes had to be again pushed into its box due to a technical problem. The battle continued for 15 minutes till the DUWO car finally claimed P1.

While the Mercedes was still in the pits the team lost overall P3 to the TCE leading #1 Autorama VW Golf TCR. And 1 and a half hours from the end the Mercedes also lost Division P3 to the Team Avia Sorg Rennsport BMW GT4. 10 Miuntes later the Mercedes rejoined the race.

One Hour from the end the NKPP Porsche got back the lead and now lead by 20 seconds. TCE was lead into the final hour by #1 Autorama VW Golf TCR. TCE P2 #131 TopCar Sport was caught and overtaken by #112 Autorama VW Golf TCR after the last pit stops were made.

After 16H of racing the winner was the #991 NKPP Porsche beating the DUWO Racing Porsche to P2 and with overall P3 going the way of #1 Autorama car the mighty GT3s were beaten by themselves. The GT-Division saw the two Porsche claiming P1 and P2 and the BMW GT4 holding on to P3 to the delight of the whole team. TCE-Division had the two team cars #1 and #112 on P1 and P2 claiming a double victory. TCE P3 went to TopCar Sport.

All in all it was a great race with rather small entry but still the teams that where there showed what true racing spirit meant.

On to the next one!